Before the October meeting, trump put pressure again...
TIME：2019-10-25VIEW：3FROM：sinofx
【Market Review】
On Thursday, the Hang Seng index opened slightly higher, followed by an upward shock, and continued to rise in late afternoon trading. In the afternoon, the Hang Seng Index closed 0.87% higher at 26797.95. On the market, Huawei concept stocks and apple concept stocks rose, while auto stocks and semiconductor stocks fell; in individual stocks, GAC group fell 2.56%, Raytheon technology rose 3.94%, tebuk international fell 3.47% and Xiaomi group rose 0.56%.
The market was again disappointed by the quarterly performance of us heavyweight enterprises. The European Central Bank emphasized easing policy and economic downside risk, investment was cautious, and US stocks developed individually. The three indexes rose at the end of the day and ended up trading at one another. In terms of sectors, gold and semiconductor sectors were well built, while auto parts sectors lost. In terms of stocks, Microsoft rose 1.97%; Tesla rose 17.67%; Twitter's third quarter profit fell more than 95% to 20.83%; eBay fell 9.13%.

In yesterday's news, US Hong Kong stock investors should understand these three important news: US President trump believes that the Federal Reserve's failure to cut interest rates is dereliction of duty; Draghi made a pessimistic assessment of the euro zone economy on the "curtain show"; the Fourth Plenary Session of the 19th Central Committee was held in Beijing from October 28 to 31.

On Thursday, shares of several popular star stocks in the U.S. hit another record high, with Tesla closing up 17.67%, surpassing GM and becoming the No. 1 U.S. automaker by market value. Zhonggai shares gained 12.56% and its market value surpassed that of Jingdong. Apple's stock price continued to brush its historical high, with its market value breaking the $1.1 trillion mark for the first time.

Pinduoduo's share price continues to brush the historical high, and its market value will surpass JD again, and then it will become the fourth largest Internet company in China

Pinduoduo surged 12.62% to close at $39.38 on Thursday, another record high. According to statistics, pinduoduo's market value rose by $5.1 billion a day, to $46.471 billion. Since late January, pinduoduo has surpassed Jingdong again, ranking the fourth largest Internet company in China, only next to Alibaba, Tencent and meituan.
The second quarter performance of pinduoduo shows that the number of active buyers, Gmv (total transaction volume) and revenue of pinduoduo increased significantly, with the annual Gmv increasing by 170.5% to 709.1 billion yuan year-on-year; the annual active buyers increased by 40.6% to 483 million yuan year-on-year. In terms of the annual growth of active buyers, in the second quarter, pinduoduo, Alibaba and Jingdong added 39.9 million, 20 million and 10.8 million active buyers respectively. The number of new active buyers of pinduoduo was far higher than that of the other two.
On October 9, Nomura Securities gave pinduoduo a neutral rating for the first time, with a target price of $34. Nomura Securities analysts said the company had "significantly improved" its position as China's third-largest e-commerce platform in terms of total commodity value and had a unique position in attracting price sensitive customers. The company is expected to report third quarter results in mid November. Analysts expect pinduoduo's revenue to more than double to $1.01 billion from the same period last year.

Apple's stock price continues to brush its historical high, and its market value has broken the $1.1 trillion mark for the first time

On Thursday, Apple's market value broke the $1.1 trillion mark for the first time to close at $243.58. Analysts pointed out that the main reason for Apple's share price rise in this round is that institutions have raised their share price expectations. Raymond James raised Apple's target price from $250 to $280, with a target high of about 20%. Currently, Apple has 25 "buy" ratings, 17 "hold" ratings and 6 "sell" ratings, with an average target price of $226.
In addition, apple originally set a level of 70 to 75 million iPhones for shipment in 2019, but with the iPhone 11 hot, Apple has increased its supply chain orders to 75 million, exceeding the expected number.
Tianfeng Securities pointed out that Apple's iPhone 11 sold well and its sales continued to exceed expectations. In the case of Apple iPhone 11 sales, you can pay attention to Apple concept stocks: Raytheon technology, sunny optical technology, Qiu Ti technology, Fu Zhikang, etc.

Ping An's net profit attributable to its parent in the first nine months of this year increased by 63.2% year on year

Nokia fell 23.68% to $3.93, its lowest price since August 2013. According to the data, Nokia's net sales in the third quarter were 5.7 billion euros, compared with 5.458 billion euros in the same period last year. From July to September this year, basic earnings fell to 0.05 euros per share.
Nokia's third quarter profit was in line with expectations, but due to fierce competition and additional investment, the company lowered its full year profit forecast and EPS for 2019 and 2020, and Nokia's share price fell nearly 24% at one time in Helsinki, Finland, the largest decline since 1991. Shortly after the opening of the US stock market, intraday prices hit a new low of more than six years.

Jeffrey, an investment bank, issued a report, covering China's oil field service industry for the first time, which is expected to benefit from the acceleration of shale gas development in the mainland and the increase of exploration expenditure of oil giant enterprises, with a positive view on the sector. The bank estimates that the annual compound growth rate of capital expenditure of China's three major oil companies in oil exploration and production from 2018 to 2021 is 11%. For the first time, Furui rated CNOOC oilfield services and Sinopec oilfield services as buyers. The bank's preferred service is CNOOC oil, which is expected to record strong growth in the third quarter and benefit from CNOOC's capital expenditure, with a target price of HK $12.75 for H shares.

Goldman Sachs downgraded twitter on Thursday because the social media company underperformed. Goldman downgraded the stock to neutral from buy and lowered its target price to $34 from $52. Goldman also lowered its earnings forecasts for 2019, 2020 and 2021 to "reflect the company's advertising problems."
"There is uncertainty about Twitter's ability to drive broader advertiser demand due to the lack of visibility into advertising platform remedies, and the risk of further multiple compression, prompting us to reduce our rating to neutral," Goldman said Despite the downgrade, Goldman Sachs still believes that Twitter's value is still growing significantly, as evidenced by "broad-based and accelerating dau growth".

☆Fanxing is optimistic about stocks and bonds in China

It is reported that Societe Generale's favorite risk assets include shares and bonds in China. The bank reported that Chinese onshore stocks and bonds should be boosted by China's huge room to move monetary, fiscal and foreign exchange policies. Chinese assets have also been helped by structural capital inflows as more of the global benchmark indices are incorporated into Chinese assets.

☆According to the IPO information, Shinki Shaxi Group Co., Ltd. (hereinafter referred to as "Shinki Shaxi") will start offering in Hong Kong on Friday, October 25, Japan. Xinji Shaxi, China's largest hotel supplies store, once submitted an application for listing on the Hong Kong Stock Exchange on April 1, but it was resubmitted on September 30 after the failure. Raffaello Capital Limited is its exclusive sponsor.

☆According to market news, HSBC plans to cut hundreds of jobs in the Middle East from next month and pay attention to the opening changes. 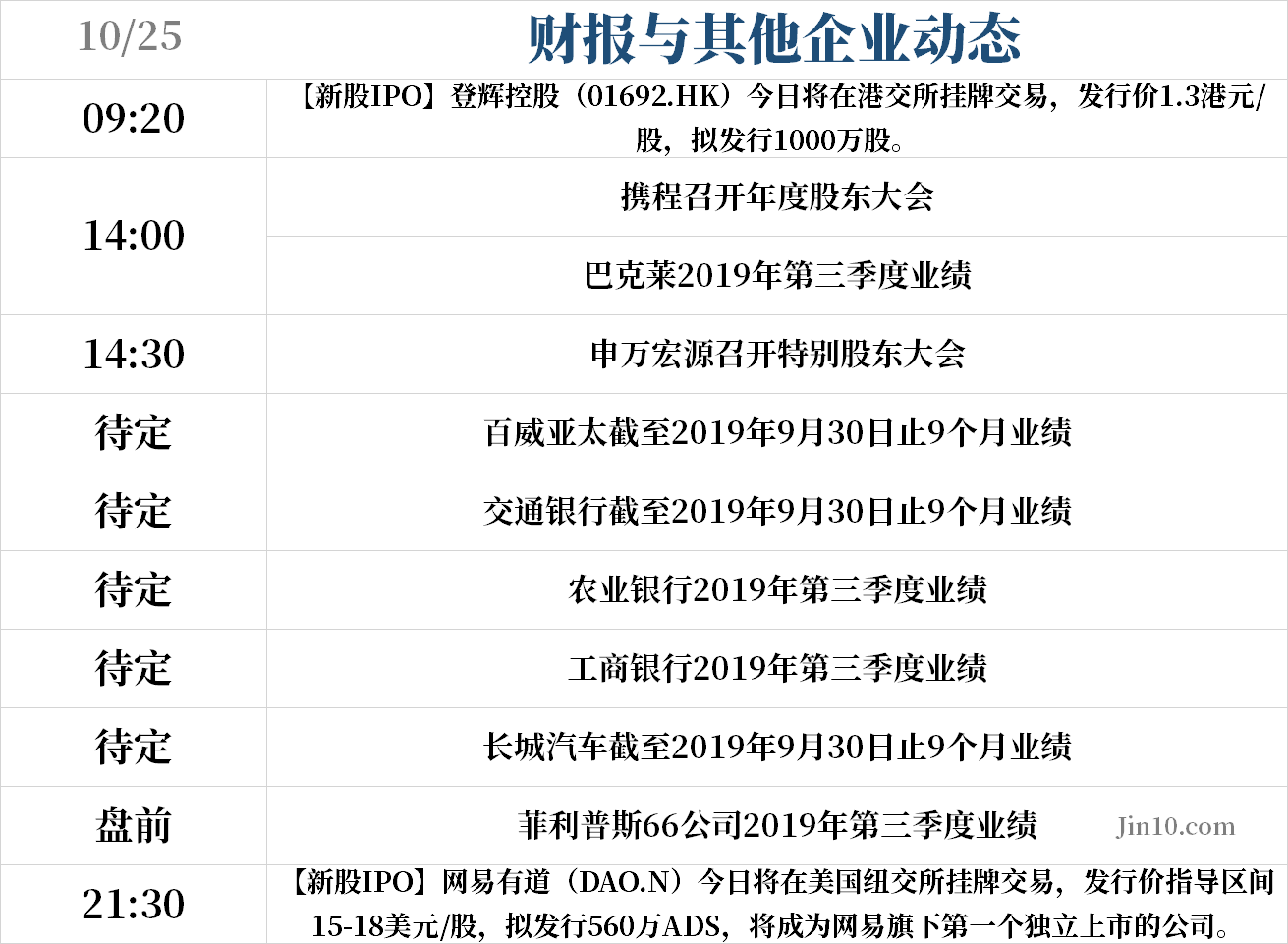